Under utilised fish once bycatch is now becoming byproduct thanks to master fishmonger Jules Crocker of Joto Fresh Fish and Cleanfish Australia. Jules has helped concerned fisherman find a solution for the non-targetted fish species that end up in their nets despite every effort to minimise their bycatch when fishing for their targetted species. Jules has taken these under utilised species to the top chefs in Sydney to taste and trial with fantastic results.

It has been made viable, due to the buying comittment of Fish & Co and other restaurants, for the fisherman to retain these lesser known alternative fish species, knowing that there is now a guaranteed market for them.

So far at Fish & Co we have served Bigeye (Red Bullseye) and Javelin as our ‘fish of the day’ and the response from our customers has been only positive. These are truly tasty fish and it makes you wonder why the heck they were being discarded for so long! That’s another story in itself, but thanks to Jules Crocker we are now becoming more aware of the lesser known fish species and armed with this information and education we can continue to make sustainable seafood choices.

the discards plus any organisms that are not retained

the retained non-target catch, which is destined for sale 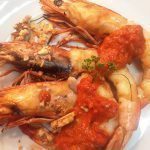 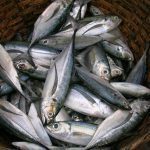 Holy Mackerel, this is an easy recipe!Sustainable