There’s nothing fishy going on here – From the SMH

We have been humbled lately by all the great press and feel we are now getting into stride having ironed out most of the the little niggles that go with starting any business.

We are looking forward to our first full New Year and the opportunity to meet and serve you, so drop in for what we believe is very tasty sustainable seafood.

“There’s nothing fishy going on here” 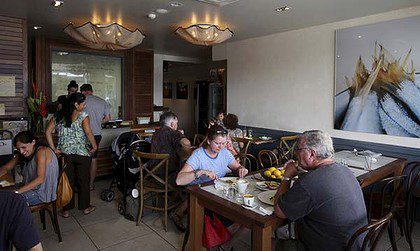 I’m at a fish cafe with two teenagers who aren’t very keen on fish. It’s a small detail their father doesn’t mention until we sit down to dinner at Fish & Co. This small, casual eatery serving sustainable seafood will have to work hard to impress our table.

Luckily, the pesca-phobes are fond of fish and chips. And, yes, if we order salt and pepper cuttlefish and Vietnamese summer rolls, they’ll try them. All is not lost.

A smart addition to a suburb with surprisingly few inspiring eateries but plenty of potential customers, Fish & Co is the brainchild of chef Tom Kime. From England, he now lives in Bondi with his Australian wife, via stints working with David Thompson at Darley Street Thai and travelling the world eating street food and writing books, a couple of which are displayed at the counter.

My local spies tell me the place has been packed since it opened six months ago. On this sunny Sunday evening, there are several large family groups and some older couples. It’s the kind of place that fits the bill when you don’t feel like cooking, don’t fancy takeaway but don’t want to fork out too much.

The decor is simple and thoughtful – nautical but not twee. Sculptural palm husks adorn the wall, a concrete sink set into the counter holds beer and wine on ice and hanging linen light shades look like jelly fish. Bi-fold doors open on to the street and there’s a row of tables on the pavement.

The service is affable and relaxed but prompt. The salt and pepper cuttlefish arrives quickly and, although it’s pale, the semolina batter is crunchy and the seafood tender, with an addictive chilli jam. 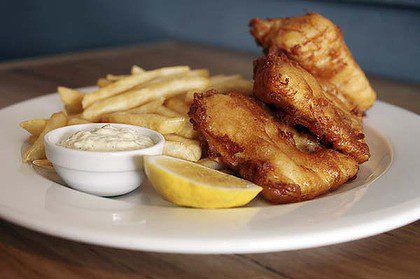 A ceviche of white fish is too citrusy, the leatherjacket’s delicate flavour drowned in a sharp tang. The chicken and prawn summer rolls – a special – are more chicken than prawn but come with a good soy-based dipping sauce and fresh Vietnamese basil leaves on the side.

Of the mains, the beer-battered fish is the standout. Three huge slabs of golden-fried hoki come with a mountain of hand-cut chips and excellent house-made tartare. Our waiter brings tomato sauce without being asked. We’re impressed.

The teen verdict is a thumbs up. ”These are quality chips,” says one, while the other praises the hoki. ”It’s not too fishy – I don’t like fish when it’s too fishy.”

Two enormous fish cakes made with smoked haddock are not so successful. Too much potato dims the haddock’s flavour.

Grilled fish of the day is Coorong yellow eye. The four small pieces come with a dressing of roast red peppers, black olives and rosemary.

Of the three desserts, gelato appeals the most. Tonight, there’s only one flavour left: fig. It’s creamy and very figgy – a bit too much without other flavours to balance it. The two other options – a lemon cream pot with marinated strawberries and almond biscuits, or a chocolate, cinnamon and orange pudding with blood orange – are not bad but you don’t come here for the sweet stuff. The teens say they would be happy to return. It seems Annandale has scored a good catch. 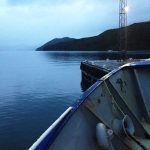